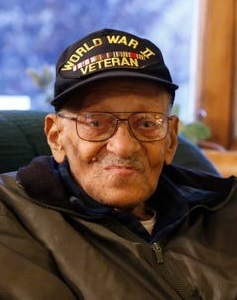 Stuart W. Vidal – 103, passed away peacefully at home with family on March 21, 2020. A life that spans so many years can be difficult to summarize into just a few paragraphs, especially when there is such a rich tapestry that has been woven along the way. Stuart Vidal lived a long and fulfilling life that spanned times of war, times of peace, times of prosperity and times of struggle – all things that shaped the man that was loved.

Stuart grew up in New Bedford, MA, son of the late John E. Vidal and Anne Chase. He attended school until the 9th grade when he left to work as a golf caddy in order to support his family during the Great Depression. After returning from the military, he worked as security at IBM for 25 years until retiring.

Stuart was a veteran of World War II, where he served as 1st Sergeant. He was drafted in 1942, and served 6 years with distinction. United States Army 1st Sergeant Vidal and his division were involved with the construction and maintenance of the airfield at Tinian, one of the Northern Mariana Islands in the South Pacific. The discipline and patriotism he learned in the Army never left him, as his friends and family will attest. He was a long standing member of VFW Post 170 and American Legion Post 1302.

Stuart was an avid golfer and bowler, and a beautiful singer. He was a lifelong New York Yankees and Knicks fan. He was very proud that he was able to say he watched his favorite players, Babe Ruth and Lou Gehrig play in their prime. Stu was your go-to guy for all sports related trivia.

He leaves to cherish his memories his wife, Noel; his 4 step-children and 6 grandchildren. He also leaves behind several nieces, nephews, cousins and many life-long friends. He is predeceased by his first wife, Shirley; and his parents, his three brothers and sister. Stuart will be deeply missed by all who knew him. He had a bright and positive personality for everyone he touched.

A Memorial Gathering of Family & Friends to celebrate Stuart’s Life will be held at a later date, along with a private inurnment service at the Massachusetts National Cemetery, Bourne, MA with military honors from the United States Army Honor Guard. The family wishes for memorial donations to be made in Stuart’s name to the Hudson Valley Honor Flight, P.O. Box 375, Walden, NY 12586. To offer the family a message of condolence or share with them a memory, please visit: www.libbyfuneralhome.com