Musacchio, Carmen A. of Fishkill, entered into rest Sunday, January 25, 2015 at Vassar Brothers Medical Center, Poughkeepsie. He was 83.
Born March 22, 1931 in Canastota, NY. He was the son of the late James and Millie Musacchio.
Carmen was a Retired Correctional Officer for Fishkill Correctional Facility as well as Downstate.
He was a member of St. Rocco’s Society, The Beacon Elks, The Shamrock Assoc., Poughkeepsie and St. Joachim’s Catholic Church, Beacon. He was also a U.S. Navy Veteran serving from 1949-1953.
He was married to the late Phyllis Musacchio, who predeceased him January 21, 2013.
Survivors include; four children, Terry Sassi of Beacon, Kathy Williams (Irving) of SC., Beth Musacchio (Jerry) of Fishkill, Robert Musacchio of Poughkeepsie, two brothers, Anthony Musacchio (Nancy) of Beacon and James Musacchio (Jean) of Fishkill, a sister, Patricia Mastro (Robert) of Fishkill, four grandchildren, Tamika, Richard (Lisa), Tiffany and Alex Carmen, a sister-in-law, Phyllis Horton of Beacon, as well as several great-grandchildren, nieces and nephews.
He was predeceased by a son-in-law Richard Sassi, and brothers-in-law, Robert Horton and Donald McMillen and a sister-in-law Clair McMillen.
Visitation will be held Friday, January 30, 2015 from 2:00 to 4:00 and 7:00 to 9:00 pm at Libby Funeral Home, Inc. 55 Teller Ave. Beacon, NY.
A Mass of Christian Burial will be celebrated Saturday, January 31, at 11:00 am at St. Joachim’s Catholic Church 51 Leonard St. Beacon, NY.
Interment in Fishkill Rural Cemetery will be private and at the convenience of the family.
In lieu of flowers memorial contributions may be made to Hospice of Dutchess County 374 Violet Ave. Poughkeepsie, NY 12601
Arrangements are under the direction of Jarett D. Quick of Libby Funeral Home, Inc. 55 Teller Ave. Beacon, NY 12508 (845) 831-0179
For directions or to leave an online condolence please visit www.libbyfuneralhome.com 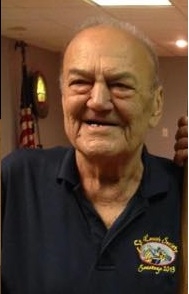